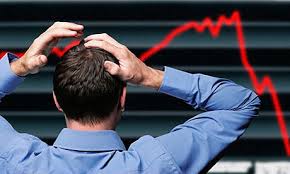 5 Reasons, IT stock are shown down trend?

1) Stable Government to focus on Infra, Banking and Capital goods sectors: You would have surprised by this title. However, there is no major economic growth seen in the last few years in India. Hence investors believe that in this current election, stable Government is expected to form and to focus on non IT sectors like Infra, Banking, Capital goods , etc. Currently, investors believe that IT stocks are no more “that attractive”. This is clearly seen in last 3-4 months IT stocks share prices.

2) Appreciation of the Rupee:  Rajan effect is seen in the last few months from Rupee moving from Rs 63 to Rs 60 per dollar. Rajan has already indicated  that such measures would show slow results. I would not be surprised if Rupee touches back to Rs 55 per dollar in coming months. IT companies which are dependent on software exports would get hit with such Rupee appreciation. They have been seeing good profits in last 1 year when Rupee has depreciated from Rs 55 to Rs 66 per dollar. This straight away added 10% to 20% to the bottom line of the company. Now with Rupee appreciating to Rs 60 per dollar and any future movement lower than this would impact the profits of IT companies.

3) What happened to Garner growth prediction strategy : 6 months back, Gartner, the world's leading information technology research and advisory company, has predicted that the Indian IT spend for 2014 would be $ 17.3 Bn which would be 6% growth compared to 2013. 4 months have past, but not seen any major growth in IT that is predicted by Gartner. There is no major indication about such growth in the coming months too. Has a Gartner prediction would take time?

4) US Stock market signals “weak”: In the last few days, we could see huge selling pressure at NASDAQ where investors dumping IT stocks. US investors believe that IT stocks are overvalued, hence dumping them. Another reason is no major increase in IT spend in US which generally triggers during Q1 of the financial year (Jan-Mar). If there is no major increase in spending by US, how IT companies in India would get benefitted?

What are the possible things that can happen in near future?

Let us go little practical. We can assume that existing Government would continue or so called “stable government” would get formed.

2) Existing Government to continue: Since investors were expecting the new government to be formed, but in case existing government would continue, there could be a possible market crash and stock market can see downturn for a few months. Since IT stocks are not the favorite of investors, they can dump them first and IT stocks may get hammered.

8 thoughts on “Should you dump your IT stocks / Technology Mutual funds now?”