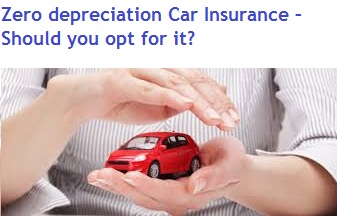 What is Zero Depreciation Car Insurance?

As the name suggests, Zero depreciation car insurance provides the comprehensive protection  of your car against all physical damages without factoring in the element of depreciation. It means that you get the full settlement of the claim without any reduction in the name of depreciation. For instance, if your car is damaged due to collision, you will be able to cover the entire cost. Now lot of queries might be running into your mind which I would clarify in subsequent article.

What is the difference between the regular insurance and zero depreciation car insurance?

Value consideration at the time of settlement of claim

Age of the car

What points to be considered before opting for a car insurance policy?

Should you opt for Zero Depreciation Car Insurance?

It is a wise decision to take zero depreciation cover only in the case the car is new. It would cover all the threats and fear of physical damages of the car. But, one should be willing to pay the extra premium charged as every good thing comes for an extra cost only. Many people think that it is useful only in the case of new drivers. But, it is not true because even the most experienced drivers can damage the car due to other’s mistakes.