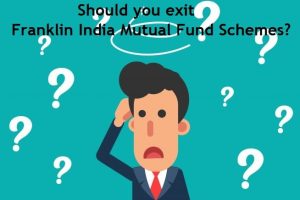 One should note that it is only Franklin India mutual funds which took this decision and the entire mutual fund industry was able to sustain this covid-19 crisis in terms of redemptions.

What are audit report findings which Moneycontrol is talking about?

Here are the summary of key findings in the audit report by Choksi & Choksi submitted to SEBI as per moneycontrol article.

2) Certain key management personnel have redeemed their funds before the announcement of wind up of debt mutual fund schemes.

3) These debt funds gave favors to specific companies it had invested in by not exercising the put option, despite the suggestions given by the risk management committee to its Chief Investment Officer to do so. A put option is a contract that gives its holder the right to sell a number of equity shares at a pre-determined price, called the strike price, before the option’s expiry. As per the report, fund managers were inconsistent with exercising the put option. With some companies, they executed it, but with some others, they didn’t, despite a major downgrade from category A to category D grade in less than a year’s time.

4) Fund managers were investing in bonds of illiquid companies and were not using the put option. This raises several questions and needs to be answered in Sebi investigation. The rules permit fund managers to execute the put option when investments are downgraded by credit rating agencies.

5) The forensic audit pointed that the firm invested heavily in unlisted debt securities, which were mainly illiquid. Some of those companies were newly incorporated.

If you are the investor of Franklin Mutual Funds, you might be wondering what should you do now.

1) If you have invested in Franklin debt mutual funds, there is nothing you can do. Currently, all eyes are on the Karnataka High Court where a group of investors  are seeking multiple reliefs, including directing the firm to release the money that it owes to investors. One need to wait till we get clarity about debt mutual fund schemes. Even I have invested in one of the Franklin Debt fund and waiting for my money.

2) If you are investing or invested in Franklin equity mutual funds and assume that moneycontrol article is wrong. This is still under investigation with SEBI and the outcome of the investigation could be positive or negative for Franklin India. Can you wait till such time?

3) If you are investing or invested in Franklin equity mutual funds and assume the report is correct. Can we wait for some more time till we get clarity about such findings?. But do you have time to exit by then? In such case, don’t you think that its the time for you to review such investments NOW?