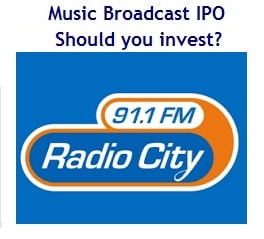 Also Read: Top 4 Mutual Funds from Motilal Oswal – Should you opt for them?

Radio City is the first private FM radio broadcaster in India. They operate radio stations under the brand “Radio City”. It is part of Jagran Prakashan Ltd group. They have grown its presence from four cities in 2001 to 29 cities as on November 25, 2016. These radio stations include the eight “Radio Mantra Stations” transferred from SPML pursuant to the Scheme of Arrangementand a radio station at Kanpur which we launched recently. They are present in 12 out of the top 15 cities in India by population. As on March 31, 2016, its radio stations reached out to over 49.60 million listeners in 23 cities covered by AZ Research.

1) Offer for Sale by selling shareholders. Company would not get any amount from this.

Reasons not to invest in a Music Broadcast Limited IPO

Disclaimer: I am interested in investing in this IPO. The idea of giving positive and negative factors to investors in this article is to create awareness and education about this IPO. One should NOT constitute this as investment advice to buy. Please consult your investment advisor before you invest in such high risk investment options.

Music Broadcast IPO – Should you invest or not