IL&FS Crisis – What exactly happened and who is the biggest loser? 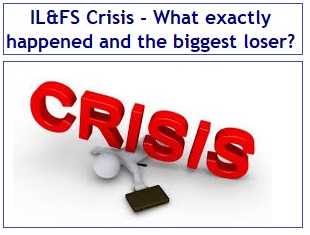 IL&FS Crisis – What exactly happened and who is the biggest loser?

IL&FS Crisis has tumbled the entire Indian economy. Two days back, NCLT judgement allowed Govt of India to take over the control of IL&FS and sack the board of directors of the group company. Till last Sunday, investors felt it would collapse entire mutual fund industry in India. What is IL&FS Crisis? How did IL&FS Crisis start? How IL&FS went into Crisis mode in the last 4-5 months? Should mutual fund investors take a break about their mutual fund investments?

Over 30 years, IL&FS has helped develop and finance projects worth about 1.8 lakh crore and its transport subsidiary is building about 14,000 lane-kilometers in over 30 projects.

Currently, the group is reeling under a huge outstanding debt of Rs 91,000 crore and planning to sell assets to raise funds. Of the total debt, about Rs 57,000 is from public sector banks.

According to the government, it has the infrastructure and financial assets exceeding Rs 115,000 crore. IL&FS has 169 group companies as on 2017-18, including subsidiaries, joint venture companies and associate entities.

How did IL&FS Crisis start?

One needs to understand where exactly IL&FS Crisis got initiated.

1) IL&FS would take a short term financing and provides long term funding to projects. There was the “Risk Management team” within the company which was supposed to do “risk assessment” frequently due to such unique business model. However, Risk Management team has not met in the last 4 years from 2015-2018 even once.

2) The company has shown Rs 2,670 Crores losses for FY2018 which raised eyebrows of stock market experts.

4) IL&FS has defaulted DSP Credit Risk Mutual Fund commercial papers. These were rated as AAA. Due to default of payment, DSP Mutual Fund was under pressure for redemptions from corporate clients. It cannot sell Govt bonds as the yield was high.

5) IL&FS has started defaulting to several commercial papers and repayment of loans to mutual fund houses, corporates and banks.

The above is the old story.

How IL&FS went into Crisis mode in the last 4-5 months?

Here is the series of incidents on how IL&FS went into Crisis.

2) In Jul-18, IL&FS subsidiary IL&FS Transport has delayed Rs 450 Crores of repayment to SIDBI. This is where the IL&FS Crisis started.

3) ICRA and CARE started downgrading the ratings due to these payment defaults.

5) In Aug-18, it has again defaulted 2 commercial papers to mutual fund AMCs and then later paid in 2 days late.

7) ICRA, CARE and BWR has downgraded its ratings to “default” or “junk”. This is the worse of such ratings. RBI has initiated special audit about this company.

9) SEBI has intervened very late in this case. Two weeks back it said it would look into this matter and assess risk on various mutual fund schemes.

10) In 21st September DSP Mutual Fund has sold DHFL Commercial Papers as it cannot sell Govt Bonds due to pressure from corporate clients.

I can say all have failed for more than 4 months in assessing this crisis. One could not imagine the crisis of Lehman in 2008 now being occurred in India.

Now based on direction from NCLT, Ministry of Corporate Affairs has taken over the control of the board and sacked its existing board of directors. This is swift reaction now in the last 3-4 days. Similar rescue was done for Satyam Computer Services which was hit by Scam.

Is IL&FS Crisis or a Scam?

There are series of incidents happening that indicates mis-management in the company. One cannot rule out even if there is Scam in IL&FS Crisis now. New board is expected to come with plan of action in next 2 weeks i.e. by 15th October, 2018 on how such company would become operational in normal way. If in the process we come to know that there is Scam, Indian Stock Market and Mutual Fund industry can take huge beating in coming months. With elections coming in 2019, politicians would ensure that stock markets are up in 2019. One need to carefully watch for next 3 months.

Who would be the biggest loser in this entire episode?

Mutual Fund investors who are investing in Mutual Fund Schemes would be the biggest losers. Mutual Funds are investing in commercial papers, NCDs, Corporate Deposits with such companies in large size. With such companies defaulting or delaying payments, mutual fund schemes may expect redemption pressure and they may not be able to honour redemptions on time. Investors of stock markets are also the biggest losers. Stock markets already tumbled in the last 2 weeks. Many infra company stocks have fallen up to 60% of its share prices. IL&FS Transport, IL&FS Investment Managers, IL&FS Engineering, DHFL, Indiabulls real estate, YES Bank, Reliance Infra has taken a big beating in their stock prices in the last 2-3 weeks. Due to news about take over by Govt of India, IL&FS group companies have gained in the last trading session.

If Govt of India would not have taken the control of IL&FS board, entire Indian mutual fund industry would have been collapsed.

With Govt of India taking control of IL&FS board, the risk is contained to some extend, however still not yet eliminated. If you are investing in mutual funds alone, you should be cautious and keep observing the things now on a daily basis. There is nothing like long term investor now as your entire money can collapse with such crisis. As an immediate step, keep some money as liquidity and don’t expect you can sell them in coming months as these are already tumbled and showing lower NAV.

We would cover in the next article about the mutual fund schemes that high exposure to such high risk companies.

24 thoughts on “IL&FS Crisis – What exactly happened and who is the biggest loser?”