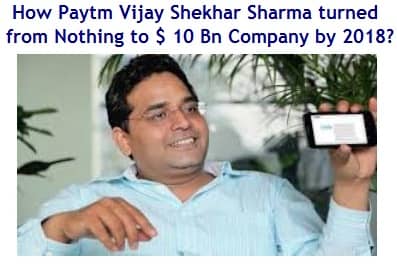 In today’s business world, Vijay Shekhar Sharma is recognized as one of the most influential personality. He is the co-founder and CEO of India’s biggest financial Tech Company named Paytm worth more than $3 billion in 2016. And all this success came in last five years due to his hard work and devotion. Who was Vijay Shekhar Sharma 7 Years back? Do Paytm became billion dollar company over night? How Paytm Vijay Shekhar Sharma turned from nothing in 2011 to $ 10 Billion Company in 2018?

Owned by One97 Communications, Paytm is a digital platform that allows you to transfer cash into the integrated wallet through online banking, debit card, credit card or by depositing directly at selected places. Initially the company provided simple services like recharge of phones, payment of utility bills etc and now it has extended its services to a large extent.

What was Vijay Shekhar Sharma story 7 years back?

Vijay Shekhar was running a company named One97 Communications. This was the parent company of Paytm. Here, they used to experiment with the three basics of internet – content, advertising, and commerce. In the year 2011, he pitched the idea of payment ecosystem in front of his board. Initially, the board refused the proposal straight away but he was determined to build a huge company that runs in the long run. And, it was with his hard work, the company started Paytm, i.e. pay through mobile. He left no stone unturned to make this platform a huge success. After this, he didn’t turn back again.

Vijay Shekhar Sharma’s life was not that exciting

The struggle for Vijay Shekhar Sharma began when he was 14 years old. He left his small town to pursue his graduation from Delhi College of Engineering. This was the first tough challenge he faced to leave the cozy world and enter into the realities of hardships. While he was topper in his school, he could not pick up in the college as there was a transition in the language. He could read and write English properly as he completed his education from Hindi back ground. He tried a lot to cope up the things but was so disheartened that eventually he stopped attending college. But, he was a man with different perspective. He utilized the time of not attending the college by working and learning new things with internet. He aspired to go to Stanford but financial constraints and challenges with English language stopped him to do so. He emulated some of the genius of Stanford by learning how to code all by himself. He started building his own content management system.

In 2005, he was left bankrupt by his partners with whom he began the business and raised the hefty fund of Rs. 8 lakh. He was conned off 40%. He was devastated but still didn’t give up and worked hard to open a company called One97 Communications. They started experimenting with the basics of internet, its content, advertising and commerce. In the year 2011, he proposed for the digital payment platform and thereafter, there was no looking back.

Vijay Shekhar Sharma turned Paytm valuation to $ 10 Bn company in 2018. The journey to take the company from nothing to $10 billion was never the easy. Vijay Shekhar possesses some of the rarest qualities that took his company to paramount heights. Let us focus on those qualities.

Never give up – The biggest mantra for success in life is never give up to the difficulties in life. Vijay Shekhar was heart-broken many a times but still stood firm with his strong will to do something in life.

Respect your colleagues – All the people employed in his company are never referred as employees or workers. They are always called as colleagues or team mates. He has always shared the credit of his success with them.

Building trust in customers – Vijay Shekhar stressed highly on building trust amongst customers. He bagged the loyalty of the customers by giving them customer care services round the clock to address their worries and enable them to trust the wallet enough. 30% of the company’s campaign budget is invested in building trust with customers.

Used public media – He even launched in Twitter and Facebook as to facilitate that as soon as the customer complained, immediately action can be taken on it.

Never afraid of taking risks – He proposed the idea of digital payment ecosystem in front of his board. When the board was not convinced, he put his $ million in front of them and said, “all this is yours if the money put in the site is wasted.”

Accept challenges – Vijay always says- “there is no fun doing things what others ask you to do, the real fun is in doing what people say you can’t do.” He was very enthusiastic about challenges and determined to face it and come over it.

Thinks for long run – Vijay Shekhar has a vision for long run. He needed business partners not mere syndicated investors. He wanted to build long term relationship with them.

Profit-sharing – He has given 4% of his equity to the team which is currently valued at $120 million. In fact, he has distributed more to his team than any amount of salary cumulatively given. He gives good rewards to people who contribute to creating his vision.

Utilized time efficiently – when Vijay Shekhar was not attending the college, he utilized that time in a productive manner to become an entrepreneur. He played with the surface of internet to discover new things.

Entrepreneur thinking – he possessed the aspirations of an entrepreneur. He started his job at MNC which he quit after 6 months to build a company of his own.

Hard-working – there are no short-cuts for success in life. When he was left alone by his partners in 2005, he skipped meals many a times and walked long distances to attend work and meetings.

Conclusion: This is not a story about Vijay Sharma. These are inspirational quotes for all individuals who want to be successful entrepreneurs in their life. I loved reading the qualities of Vijay Sharma, hence sharing them with the readers too.