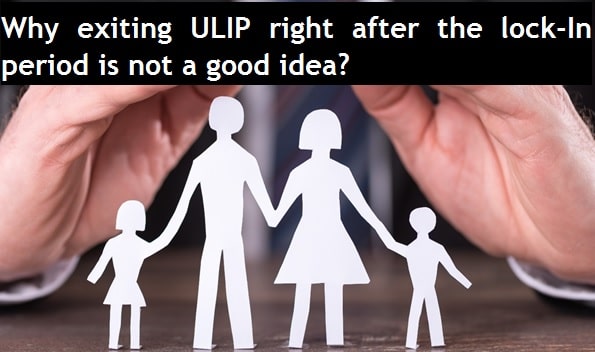 Many think low cost ULIPs (Unit Linked Insurance Plans) are one of the most popular life insurance products. ULIPs are inherently market-linked financial instruments that allow you to invest in a variety of equities and debt funds – based on your financial risk appetite. At the same time, you and your family receive comprehensive life insurance coverage under the ULIP plan, so that you remain protected from life’s uncertainties at all times. These ULIPs have a lock-in period and many feel that once opted they want to exit after the lock-in period. If you have invested in such low cost ULIPs and thinking whether you want to exit after lock-in period or continue for the long term, this article can provide some tips.

Given the fact that equity fund options come with intermittent volatility while being the top-performing assets over an extended period, the chances are that risk-averse individuals can get overtly influenced by short term market volatility. Subsequently, they may decide to discontinue their ULIP Plan. Let us look at the various reasons why certain investors choose to stop their ULIP plan immediately after the completion of the lock-in period, and why you should remain invested in ULIPs and other types of investment for more extended periods.

What is Lock-in period in ULIPs?

ULIP Plan has a 5-year lock-in period, which essentially is a stipulated period during which if you (as the policyholder) decide to surrender or discontinue the ULIP plan, you will not receive any payout or liquidity. It is only after the completion of the lock-in period that you will receive the payouts.

There could be different reasons why investors, especially those who are relatively risk-averse, would look to exit the ULIP plan immediately after the lock-in period completes.

1) You may believe that the accumulated fund value is good

The accumulated fund value under the ULIP plan may appear to be significant. The increase in valuation could be due to a sudden boost in market conditions. Due to the boost, your initial investment reaches an all-time high. However, it is here that you must not forget the purpose of the ULIP investment.

In case you choose to make a partial withdrawal from the accumulated funds, you may end up compromising your life goals.

It is possible that you might not be much impressed with the fund performance during the lock-in period. Typically, a ULIP plan is a investment instrument that allows you to regularly check the Net Asset Value (NAV) daily and keep a track on your portfolio.

However, the accumulated fund value is severely impacted by various charges such as mortality charge, portfolio management charges, and administration charges. These ULIP plan charges are levied during the lock-in period and are usually high during the initial years, after which they reduce substantially over the years.

The fundamental impact of these charges is that they cut in significantly into your accumulated fund value, thus reducing your profit. According to experts, the actual return on the allocated fund options under a ULIP plan is usually quite less in the short-term thereon.

1) You may receive comparatively lower returns

This deduction is usually higher in the first policy year and significantly reduces with time. After the lock-in period, however, the different charges are reduced to such as extent that they stop impacting the accumulated funds. Thus, it implies that

b) If you choose to exit the ULIP plan immediately after the lock-in period ends, you may receive comparatively lower returns – possibly a tip of the iceberg of total accumulated re-turns that you would have received if you would have remained invested till maturity

2) You may not achieve your financial goal

When you choose to exit the ULIP plan prematurely – immediately after the lock-in period ends, you risk losing on fulfilling your life goals. A ULIP plan in India is all about making regular investments in the desired combination of equity and debt fund options until the maturity of the policy.

Throughout the policy tenure, you cover for both the risk and return – focusing on re-visiting your financial plan in case, your investments and risks are not properly aligned to help you achieve your future goals. Overall, ULIP plans in India are designed to provide low returns, liquidity, and life insurance coverage if you choose to stay invested in the plan for the entire policy period. These are for conservative investors.

Like Mutual Funds, even a ULIP is a long term game

Like mutual fund investments, ULIP investments are also a long-term game, in which you have to pay the premium and remain invested for the agreed policy tenure.  During the investment tenure, if you feel that your selection of fund options are not performing up to the expectations or you wish to ride over the market volatility, you may choose to partially switch to relatively less volatile (or less risky) fund options such as bonds or liquid funds. You can make these switches multiple times based on your requirements, market conditions and risk tolerance.