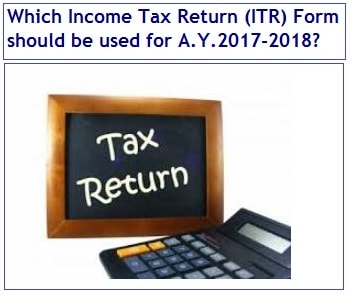 Last month, Income Tax of India has made some changes into Income Tax Return (ITR) Forms for A.Y. 2017-2018 (Financial year 2016-2017). Some of the forms are made simple now. Since the ITR deadline is 31-Jul, many of you are yet to file income tax returns. Which ITR Forms to be used for last financial year and assessment year 2017-2018? Who need to file income tax Returns in FY2016-2017? This article would help you to clarify these points.

What is Income Tax Return?

If you are already aware, skip this section.

An ITR is the tax form that is used to file income tax with the income tax department. The return is filed in a predefined work sheet format where the income figures are written to calculate the tax liability. The Income Tax Department has released the ITRs for the financial year 2016-17 (Assessment Year 2017-18) with few major changes in the forms. The last date of submission of these ITR forms will be 31st July. You can file income tax returns in just 15 minutes online.

According to the income tax act, 1961 every income earned by an individual, HUF, firm, LLP, company or any other artificial person has to fall amongst these five categories

The income tax department has issued seven types of ITRs as specified all the above five heads in different ITRs. One has to choose the right ITR in which his income is falling.

Who needs to file the income return?

As per the Income Tax Act 1961, every person should file the income tax return if his income exceeds the limit prescribed by the income tax department on their respective due dates. The due dates are 31 July for salaried individuals and non-auditable firms. For companies and auditable firms, it is 30 September. A person has to file IT return if his income exceeds basic exemption limit, the slab rates and the applicable rate of income tax has been tabulated below: 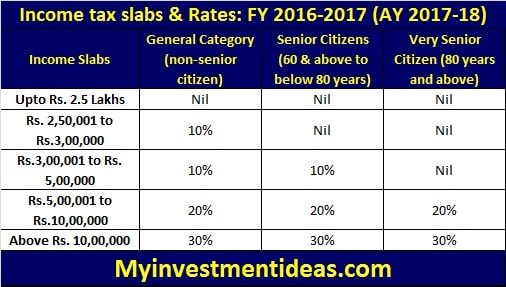 Here are the major changes in the recent ITR forms revised by Income tax Dept.

The Income Tax Department notified new income tax return forms for filing of returns for the assessment year 2017-18 (Financial year 2016-17), cutting down the number to seven from earlier nine. One more important notification is that all taxpayers will have to now mandatorily link Aadhar with their PAN cards. From 1st July, 2017 if your Aadhar card is not linked with the Pan card, you cannot file your return electronically.

The various types of IT returns with changes made are mentioned below:

2) ITR 2:  ITR 2, ITR 2A and ITR 3 has been merged into a single form of ITR 2. Individuals and HUF (Hindu Undivided Family) who is not having income from business and profession (B&P) can fill this form.

3) ITR 3: The old ITR-4 has been renamed ITR 3. Individuals and HUF being partners in firms and not carrying any business and profession (B&P) under any proprietorship can fill this form.

4) ITR 4: The old ITR-4S has been renamed as ITR 4 for the Individuals and HUF who are having income from B&P.

5) ITR 4S: This form is used for the businesses where income is calculated on ‘presumptive method’.

6) ITR 5:  This form is used by firms, AOP (Association of Persons), and LLP (limited liability partnership).

7) ITR 6: Companies other than claiming exemption under Section- 11 of Income tax act.

One important point to note in the ITRs of this year is the new column of cash deposited during the period 9th November, 2016 to 31st December, 2016. It is a onetime feature and would not be there in the ITRs from the next year onwards. All cash payments of over Rs 2 lakhs for paying loans and credit card bills during the 50 day period post demonetization will have to be disclosed in the new one-page Income Tax return forms. You can file income tax returns online at several websites for free which are simplied on their websites.

What happens in case wrong ITR is filed?

The assesse has to choose from these IT forms which are applicable to him/her according to income earned by him. If wrong IT return has been filed by the assesse, then it is treated as defective and return will be deemed as not been filed. Rectification has to be done under Section 139(9). It has to be done with in the 15 days of receiving the notice from the CPC office Bangalore. It is always advisable that the right forms are filled with accurate information to avoid all the inconveniences.

There is a set of few documents that are required for filing the return:

g)     For reporting of salaried income

iii. Details of rental income if the property is rented.

i. Stock Trading Statement in case of CG from Shares.

j)      For reporting of other income

iii. Details if there is other source of income.

Conclusion: Keeping the amendments and new requirements in mind, go ahead, select the appropriate ITR and file your returns on time to avoid penalties and interests levied as per Income Tax Act, 1961. One has to ensure to file income tax returns by 31st July.