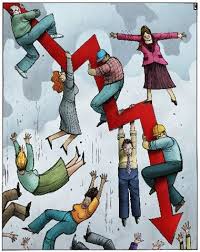 Recession – probably one of the most common negative words in this financial environment. We all have somewhere or the other heard this word now let us clearly understand its meaning, implications etc. This article is written to create an awareness about individuals about recession and how it would effect a country and finally to an individual or an investor.

Recession refers to a significant slowdown in economic activities. It generally occurs when there is a widespread drop in spending. The various outcomes of recession are:

What are the different types of recession?

1) Boom and bust recession: Such recessions occur after a previous economic boom, i.e. a sudden decline in economic activities after a boom period.

5) Depression: It is a deep and long recession, where the output falls over 10% and high rates of unemployment prevail.

Also read: Pre-approved home loan – Should you opt for it?

What are the various shapes of recession?

Recession is a temporary situation. It comes and goes. But its timing and situations when plotted on a graph, can lead to various shapes…like L, V, W etc.…

L SHAPED RECESSION refers to a period of stagnant recovery.

V SHAPED RECESSION refers to a quick recovery after recession.

W SHAPED RECESSION refers to situation where the economy goes into recession all over again after recovering from the past. It is also referred to as double dip recession. Let us study this in detail.

W shaped recession is a worst-case scenario. The economy dips into a recession and quickly recovers only to dip into another recession is called double dip recession (DDR). If the various factors like GDP, unemployment and retail sales are plot into a graph and the resultant graph is in shape of ‘W’, it is a DDR.

In a DDR the second dip usually indicates that the economy has not fully recovered from the first dip and is still under correction mode.

What are the stages of Double Dip Recession (DDR)?

2) Rebound: Massive government intervention, recovery period, money is pumped into the market with an attempt to kick-start the economy. As it is artificial and has a short-term effect, the new money cannot pump in for long leading to its third stage i.e. another dip.

3) Double dip: comes in with bankruptcies and weak industries closing down.

4) Recovery: which is slow as the economy by now becomes very weak.

United States of America: The first dip was from 1937 to 1938 then the economy improved in 1953 due to government intervention and then declined again n 1981-82. The period of decline were characterized by major unemployment, retail sector sales declining majorly and GDP going down drastically.

Even though there are people who deny the possibility of a double-dip recession, there are yet some believe that a double-dip recession may hit India, as it is a developing country with a not so strong economy. If a DDR hits the Indian economy the employment and demand would be majorly impacted. However a DDR may benefit India’s economy as well. One of the factors that will benefit India is the lowering of commodity prices like oil and metals. If the global markets continue to sink due to the US debt crisis and the European debt worries, huge spending cuts and slowdown in economies will become the need of the hour. This may bring down oil prices, thereby softening the impact of higher inflation. Should global growth weaken further, India will be impacted.”

What are the precautions to be taken during recession?

1) Secure your employment: Make sure that your employment agreement does not give the employer the authority to expel you from the job during tough times.

2) Homeowners: Make sure that you have enough fund generating incomes (like fixed income generating funds) to pay your home loans and other bank dues.

3) Health issues: Recession comes with a lot of stress; secure yourself against these stresses by making savings now. Even if there is a normal slack theses savings would insure you against bad times.

4) Investors: Investors should be careful not to overinvest during recession. Investments would seem lucrative, but if there is a double dip recession, losses can be very high, as the market would become very weak. However if investors are patient and satisfied they can earn well by booking small profits by selling at the right time instead of waiting long for huge profits.

Conclusion: So recession is a boon or a curse…it all depends on you.

Team – Myinvestmentideas.com
What is recession and what are the precautions to be taken during recession