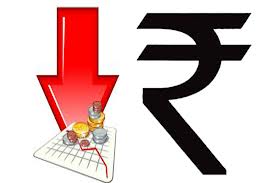 For the past 1 year, Rupee has been fluctuating and fallen heavily against the US Dollar. The rupee is currently trading at Rs 58 / Dollar. Several predictors still feel that this fall may not end now. Downtrend may continue for some more time. As an investor do not think that you would not get impacted with such fall. Also there are a few best investment options which you can encash with such fall in Rupee.

Why Rupee is falling against US Dollar?

There are several reasons for as to why rupee is falling against Dollar. Rupee hits 11 month low in the last 1 year against US Dollar. Below are the major incidents in the last one year which has impacted for such fall.

What is the impact of such Rupee depreciation for Indian markets?

Companies which have foreign debts would have to pay high interest rate as the currency payment would be in dollars. Also the repayment of such foreign debt would unnecessarily increase the value of debt. If a company as taken $ 100,000 earlier say at Rs 54 per dollar. Now they need to pay back this $ 100,000 @ 58 per dollar. Means, they need to pay higher amount due to such fall in rupee.

Oil companies import up to 70% of oil from other countries. Due to deprecation of rupee value, they need to impact the same quantity with higher price. Due to this, either they would incur losses or Government can increase the fuel prices. This would increase the inflation.

You should stay away from companies which are dealing in huge foreign debts or Oil companies under current situation.

Who would get benefitted when rupee is depreciating?

Invest in companies which are exporting: Companies which export are going to benefit with such fall in rupee. Means, companies like Information Technology (IT) or Textile companies which get majority of their revenues through exports are going to benefit. E.g. IT Company like TCS would get benefitted as the majority of the revenues are coming through its exports. While it would continue to do same business value, the dollars which are received would get converted into Indian banks at a high rate of @ 58 per dollar instead of Rs 54 per dollar which was there few months back. So you should invest in best IT companies and good Textile companies to gain in such scenario.

Suresh
Why Rupee is falling against Dollar

Latest posts by Suresh KP (see all)
Tags:Best Investment options when rupee is fallingRupee fluctuatesRupee is falling against the Dollar

6 thoughts on “Why rupee is falling against the Dollar?”