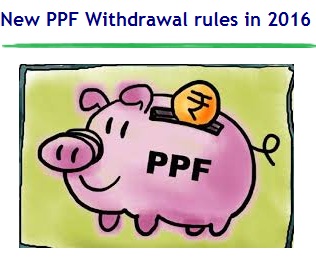 PPF is one of the best retirement saving schemes which provides highest tax free interest rates for 15 years. One of the biggest drawbacks was about withdrawal of money from this scheme before maturity. Last week, Ministry of finance announced some changes to the PPF Withdrawal from 2016 onwards which would benefit many investors. What are the New PPF Withdrawal rules introduced from 2016 onwards? How one can withdraw PPF amount before maturity? What are the guidelines for partial withdrawl of money from PPF?

If you are already familiar of PPF, you can skip this section.

The public provident fund (PPF) scheme was introduced in the year 1968 by the ministry of finance. It is an important tax saving tool for the citizens of India as it attracts many tax benefits. It is an account that can be opened in any authorized bank or authorized bank branch. The interest earned on the deposits of PPF account is tax free and also the amount contributed towards the PPF account can be claimed as deduction.

The key features of the PPF account are listed below.

How to get maximum interest on PPF?

The interest rate for the financial year 2016-2017 is 8.1% per annum. In the year 2015-2016, it was 8.7% p.a. The interest is compounded annually and credited at the end of every financial year. It is calculated as per the rates announced by the government and it keeps on fluctuating. The amount deposited before 5th of every month is counted for interest for that particular month. For e.g. if your account shows a balance of 1,20,000 and a deposit of Rs. 5,000 is made on 7th of August, interest will be calculated on 1,20,000 for the month of August and from September, it would be 1,25,000. So, in order to maximize your earnings, deposits should ideally be made from 1st to 5th of any month. You can refer my article about getting maximum interest in PPF.

You may like: NPS Vs PPF – Which is best retirement scheme in India?

Earlier guidelines about premature withdrawal would continue and here are the details.

– 50% of the account balance as at the end of the year immediately preceding the current year: or

–  50% of the account balance as at the end of the 3rd year, immediately preceding the current year.

Conclusion: PPF is one of the most popular tax saving schemes for Indians. With the introduction of clause partial withdrawal, the liquidity of the funds has increased. These clauses have tried to overcome the biggest drawback of the non-liquidity of the account.