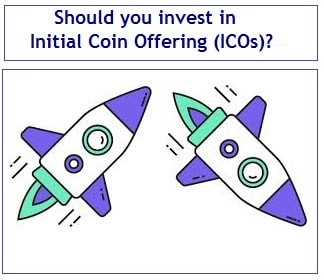 These days you might be seeing several Ads on ICO (Initial Coin Offering) which looks similar to IPO investments. Are these unique investment options or investment scams ? We see that all financial journals, newsletters and even newspapers look incomplete without the mention of these coins. Of late, there has been quite a buzz about investing in cryptocurrencies and ICOs. These are relatively new concepts and investors need to know about them. Every new investment options have a lot of pros and cons attached to them. So one should study the risks, returns as well as understand the various legal and taxation issues attached to these investments before putting in your hard earned money. What is ICO / Initial Coin Offering? Who regulars ICO? How does ICO work in Indian context? What is the difference between ICO and IPO?

Also Read: What is FRDI Bill and how does it impacts your bank fixed deposits?

What is Initial Coin Offering (ICO)?

Initial Coin Offering (ICO) is an unregulated means of raising funds. The companies operating on the blockchain platform, when needs to raise the funds through ICO, makes an arrangement on a white paper, which states about what really matters to the task, how much capital is expected to be raised to commence the project, the amount of the virtual tokens to be raised etc. Extensive efforts are made by the supporters to get the conveyed crypto coins with fiat or virtual money.

These coins are alluded to as tokens and are like shares of a company sold to investors in an IPO. In case, the cash raised does not meet the minimum requirements of the firm, the cash comes back to the supporters and ICO is declared as unsuccessful one. In the event that the ICO meets the asset necessities within the predetermined time span, the cash raised is utilized to start the venture.  It is not like the usual route wherein the companies can raise money from investors or venture capital firms; they issue tokens that contain pre-defined value in the initial offering. The value for these tokens is based on the demand just like IPO, in which a price band is set for making bids for subscription. As it is based on the blockchain technology, there is no formal or organized forum which needs to be informed and you do not get titles also to the units as in the IPO.

Comparison between IPO and ICO

In IPO, the stake of the company is sold to raise money for the entity’s operation. For easy understanding, an ICO can be thought of as an IPO under which the company doing ICO raises money by selling its crypto-token in exchange for cryptocurrency (Bitcoin or Ethereum in most cases). The value of the token issued during the ICO increases based on how well the company is doing. But, unlike IPO, the ICO may not entitle the holder to shares or stake in the company. However, the difference lays in the fact that the IPOs deal in investors while ICOs deal with supporters that are keen to invest in a new venture.

Who regulates ICO across the world?

The market of Initial Coin Offering or ICO is completely unregulated. There is no financial authority who is regulated the process of ICO. It is completely the game of demand and supply with no mediocre to manage the same. The legal state of ICO is mostly undefined. Ideally, the token is sold not as a financial asset but as a digital good. This is why ICO is often called as ‘crowd sale’.

How does Initial Coin Offering work in Indian context?

There are dozens of entrepreneurs who are raising capital by the mode of ICO. In India, very few entrepreneurs know about it, but not to forget that the awareness about such investment options shows an increasing trend. There may be many investors who are investing in ICO but raising funds through ICO is a rare case here. It is a new concept for India which is yet to gain popularity.

The number of companies, which are looking forward, to create their own cryptocurrency and offer fantastic opportunity to buy their new cryptocurrency in lieu of established ones like bit coins. From issuing regular alerts towards bitcoin cryptocurrency, the government of India at long last is moving towards compliance. According to a current CNBC India report, it might be crawling nearer to legitimize virtual money standards in India.

Also Read: How to get Interest Subsidy of Rs 2.64 Lakhs through Pradhan Mantri Awas Yojana?

Should you invest in Initial Coin Offering / ICOs?

There is no legal face to the ICO which makes the investment highly risky. Many ICOs have proved to be lucky for investors like ethereum (ETH) was sold at .0005 Bitcoin (BTC) and is worth 5.0 BTC today which fetched the profit of around 10,000 percent.

On the other hand, many ICOs end with losses. Cryptocurrencies like Lisk or Omni did not hold the value in Bitcoin the token has been assessed at the ICO. It is often used by scammers. They make a glossy website, write few blocks of bingo, promise to be the greatest project ever and at the end, deliver nothing at all.

At the end, not every initial coin offering is worth the investment. Some just throw a plan without having any sound business project but some are really interesting. The investors need to be cautious as some ICOs are actually fraudulent and as these activities are not regulated by any financial authority. If the funds are once lost due to fraudulent initiatives, no legal doors can be knocked to claim the money back.

Should you invest in Initial Coin Offering (ICOs)

12 thoughts on “Should you invest in Initial Coin Offering (ICOs)?”