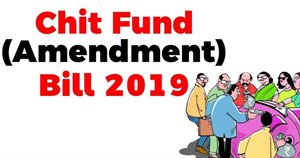 Chit fund is a good instrument to accumulate money for small investors and brings discipline in investments. It can be a reliable source of funds in an emergency. However few years back Sarada Scam alerted all chit fund investors that accumulating funds in chit fund is high risk. In order to protect their interests, the Government recently passed a Chit Funds (Amendment) Bill 2019. What is the Chit Fund Scheme and How does it work? What are the features of Chit Funds (Amendment) Bill 2019? Should you invest in Chit Fund Schemes now?

What is the Chit Fund Scheme and How does it work?

A chit fund scheme is a collective tool where various members come together and agree to pool-in a specified sum of money every month for a fixed duration. There are two parties to the chit fund- one is the organizer and the other is the members. The money so collected every month is then up for auction for any member who needs it immediately. The organizer holds the auction where all the members participate and those who want the collected money bid for it. By bidding it means that the member agrees to forego some part of the money to claim the pot. The lowest bidder gets the pot. The Chit Fund Act, 1982 has put a cap on how much a member can forego which is 30% at max. The amount foregone by the winner is then distributed amongst the rest of the members which is called dividend. It is not received in cash but deduced from the monthly installments that the members have to pay. Therefore they pay less than his actual installment. After the auction, the winning member still has to pay all the installments for the rest of the tenure of the chit fund. The same process is repeated every month until all the members have got the money once. A member who has taken the money cannot participate in the auction thereafter. If there are no bidders in any month, then a member is chosen by lucky draw and he gets the entire pot after deducting the organizer’s charges.

Let me explain this with an example.

Why there was a need to regulate Chit Funds?

Although there was a law governing the chit fund, still there are many ‘kitties and committees running on the chit fund model. This is the unorganized sector of the chit fund. They formulate their own rules and regulations, be it depositing of installments or withdrawal of money.

There is also an organized sector of chit fund, which is operated and regulated as per the chit fund law, 1982. The scam of Sarada was exposed in the year 2013, in which the company raised about Rs. 2,500 crores from the small investors and then collapsed without making the payments of the investors. The fraud came to the floor much after the enactment of the law which reflects that the current law is not sufficient and stringent to curb the frauds.

Nevertheless, it is still popular in the southern part of the county.

What are the features of Chit Funds (Amendment) Bill 2019?

The Chit Fund (Amendment) Bill 2019 was introduced in Lok Sabha on 5 August 2019 aiming to amend the Chit Fund Act, 1982. It was passed in November 2019. The bill of 1982 regulated chit funds and prohibits a fund from being created without the approval of the State Government. It was amended to integrate tough measures to curb alleged fraud. The following are the amendments to the new act.

1) The Act specifies various names that may be used to refer to a chit fund. These include chit, chit fund and Kuri. The bill additionally inserts ‘fraternity fund’ and ‘rotating savings’ and ‘credit institution’ to this list.

2) The New Act defines certain terms in relation to chit funds. It clearly defines the Chit amount, dividend, and prize amount. These terms have been renamed as gross chit amount, share of discount, and net chit amount respectively.

3) The ‘foreman’ is responsible for managing the chit fund. The new bill seeks to increase the commission of the ‘foreman’ from 5% to 7%.

4) The new bill increased the limit of the aggregate amount of chits to Rs. 3 lakh for the chit conducted by an individual and Rs. 18 lakh for chits conducted by the firm with 4 or more partners.

5) As the Act was not applicable to any chit where the amount is less than Rs 100, the new bill removes the limit of Rs. 100 and allows the State Government to specify the base amount over which the provisions of the Act will apply.

6) The Act specifies that a chit will be drawn at least in the presence of two subscribers. The Bill seeks to allow these subscribers to join via video-conferencing.

The new Chit Funds Amendment Bill 2019 aims to protect the rights of the investors. The bill provides that the chit fund operator has to have a secured deposit to the size of the scheme, which is a sufficient safeguard for people subscribing the scheme. The bill clarifies that the chit funds are legal and it is different from an unregulated deposit scheme or Ponzi schemes.

You may like: Best Investment Plans in India for higher returns

Should you invest in Chit Fund Schemes now?

Chit fund serves as an investment as well as a borrowing tool for the economically weaker section of the society for whom the banks were out of reach. Chit funds used to be a popular tool earlier, but now it has lost its charm. There have been a number of scams emerging from the chit fund system. With the growing education level and awareness amongst people and the strong, integrated banking network, people now prefer formal channels of obtaining a loan. Moreover, the income earned by the investors is not attractive enough and not worth taking so much risk.