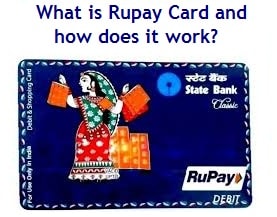 What is Rupay Card and how does it work?

With the abolition of Rs 500 and Rs 1,000 notes, Indian economy is moving towards cashless economy. All transactions are now being routed through online banking and credit card transactions. Rupay Card is gaining importance now during the monetization time. What is Rupay Card? What are its benefits? How does Rupay Card work? In this article, I would provide complete details about Rupay card.

What is Rupay Card?

Launched by the National Payments Corporation of India (NPCI) on 26 March 2012, RuPay is an Indian domestic card scheme. The word is made from the combination of two words, Rupee and Payment and is an Indian version of credit/debit card.  It facilitates electronic payments at all Indian banks and financial institutions and competes with the MasterCard and Visa in India. RuPay debit cards can be used by its holders at ATMs, PoS terminals and e-commerce websites.

How does Rupay Card works?

RuPay cards are similar any other debit cards that you might hold now. You can access them in 1.45 lakh ATMs and 8.75 lakh POS terminals across the country. It will also be accepted on 10,000 e-commerce websites. All major public sector banks, including SBI, have started issuing these cards to all their customers. The card also comes with a high end technology chip named EMV (Europay, Master Card and Visa) especially for high end transactions. It also has an embedded microprocessor circuit with information about the card holder.

Who can issue Rupay Card?

All the banks in India are authorized to issue the cards to their customers.

Can we use Rupay card for online shopping?

RuPay cards are accepted at all ATMs across the country along with all, the point of sale (POs) terminals in India.  In addition, they are also accepted at more than 10,000 e-commerce websites that accept RuPay cards.

It got the major boost up when the RuPay card was connected to Pradhan Mantri Jan Dhan Yojana as the cards were issued to all the account holders of Jan Dhan Yojana. Although some critics say that most of the cards are dormant, but the fact is that the card is now being extensively used by the people. Until March, 2016 178 million RuPay debit cards were issued under the scheme.

What is CVV number on Rupay Card?

The CVV Number (Card Verification Value) on Rupay card is like any other CVV number credit card or debit card which is a 3 digit number.

Is Rupay is Master card?

No. NPCI has rolled out its chip card for high security transactions using EMV (Europay, MasterCard and Visa) chip technology, which is a global standard for debit and credit card.

What are the benefits of Rupay Card?

Processing fee – As compared to other debit or credit cards, the processing fees for this card are much lower. Since every transaction through RuPay takes place in India only, the bank will have to pay fewer service charges to the payment gateway as compared to master card, visa etc, which are international cards.

Faster transactions – As the transactions through the RuPay takes place in India only, it takes less time in processing than other cards.

Member banks – RuPay card is offered by public banks, selected private banks, rural and cooperative banks – a total of 200 to 250 member banks is there. Other cards do not provide such a vast network covering all small and big banks.

Entry fee – In case of international cards, the banks have to pay an entry fee to become a member of the network which is not the case with the RuPay card.

Quarterly fees – The banks have to pay a quarterly fee for the international cards which is not required in this card.

SMS alert – the customers get an SMS alert after every transaction made through the card.

What are the drawbacks of RuPay Card?

The other thing is the absence of credit cards in RuPay.

Master card and Visa, etc. Offers reward points to their customers. This feature has not been added in the RuPay yet.

The demonetization of high value currency by the Central Government of India has resulted in a sharp increase in the transactions. According to AP Hota, the Managing director of NPCI, there has been a spurt in the transactions via RuPay card after November 8, when the currency of 500 and 1000 has been withdrawn by the Centre. The number has reached to 10 lakh per day, which is three times that on a normal day.

The NPCI says that there are 755 million debit cards in circulation out of which around 302 million cards are in RuPay card network (comes to around 40% of the total cards). After the demonetization, many people are using their cards for the first time.

Debit card usage has mainly been confined to the ATM for cash withdrawals. As per the Reserve Bank of India (RBI), the usage of debit cards at ATMs accounted for 88% of the transactions from 1 April 2015 to 31 December 2015. Now, with the wake of demonetization, debit cards will be used beyond ATM withdrawals.

Conclusion: RuPay is the India’s answer to the increasingly dominant market of the plastic money. Despite the challenges, RuPay can cater the needs to the large segment of Indian consumers who do not have easy access to banking and financial services. It is believed that the Indian Government is taking all possible measures to make it accepted globally.

What is Rupay Card and how does it work

8 thoughts on “What is Rupay Card and How Does it Work?”