Diesel Vs Petrol Cars – Which one should you prefer?

Diesel Vs Petrol Cars – Which one should you prefer?

Well …in this financial environment where expenses are just so high compared to our income and costs are souring in all aspects we tend to think a many times before buying things which we intend to use for several years. One such major expense on an asset is Car.  Before deciding which car to buy we usually consider the brand, look, cost and mileage. Ours is a country majorly influenced by mileage a car gives (like it is reflected in the advertisement of Maruti asking even for the mileage the rocket would give “kitna deti hai”). A person who wants to buy a car can have differences in opinion when he considers the cost efficiencies of a diesel and petrol driven car.

Also read: 10 Romantic and less expensive gift ideas for your girlfriend or wife

Diesel cars are more expensive as compared to petrol cars whereas the running cost of a diesel car is less and the mileage it gives is more. Let us compare diesel and petrol cars with the help of an example of Maruti Swift, one of the most bought cars in the country. 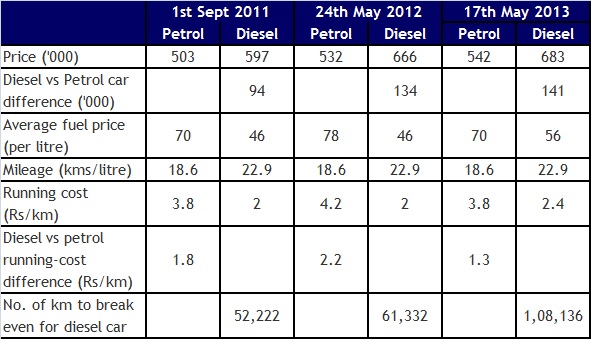 As we see above although the costs of diesel cars are more, but the average running of the car is less . So if the kms run breaks even or is more than the break-even km it is a good option to buy diesel cars.

Why is the price of diesel increasing? Should it effect our decision?

The other side of the coin says that the government is increasing the diesel prices by 40-50 paisa every month and is planning to do so for a pretty long period depending on future orders from time to time. Oil companies claim that they are making a loss of around Rs. 10 on per liter of diesel sold. The price of petrol is also increasing but at a slower rate as compared to diesel. Even if the prices come at par the mileage would always be more in diesel cars.

Who should buy a diesel car? What is the future of diesel cars?

At this point of time where the cities are extending their outer limits, areas which were suburbs a few years back are fully developed (thereby increasing the distance travelled) and increasing traffic (thereby increasing waiting time), mileage and per km costs play a very important role. Diesel cars are undoubtedly a great option if your distance travelled is high.  Honda a well-known car brand since decades, now, has also recently entered the diesel segment cars as it can see a future in it.

However if the distance you need to travel is very less say around 10-15 kms a day it is just not worth to spend those extra few lacs on the purchase price and buy a diesel car. You would never be able to recover that extra by the savings done on running costs from the expected life of your asset.

You may also like: How you build and invset your emergency fund

Conclusion:  So, now if you want to decide whether to buy a diesel or a petrol car you got to be your own judge. Just consider the average distance covered per day (say 50 km) multiply is by the expected life(say 8 years) for which you would use the asset (in days{365*8}) and then with the cost savings per km(say Re. 1). If the amount thus saved is more than the extra amount you are paying for a diesel carie. greater than 50x365x8x1=Rs. 146000.…JUST GO FOR THE DEISEL CAR…ITS WORTH IT!!!