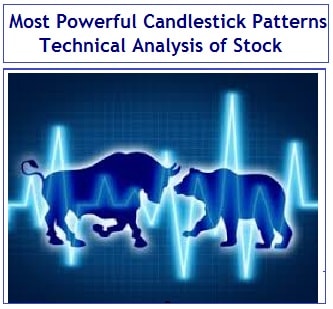 Also Read: Fundamental Vs Technical Analysis of a stock – How should you use it effectively?

What is the Technical Analysis of a Stock?

Technical analysis of stock and trends has been used by serious traders for ages. It is the academic study of historical patterns and trends of traded stocks. It considers the use of tools like bar or candlestick charts and trading volumes to determine the future behavior of stock. Although it is not 100% accurate and does not guarantee success, but, it remains one of the key methods of analyzing stock prizes along with fundamental analysis.

What are Candlestick patterns?

Candlestick patterns indicate the movement of prices of a particular stock graphically for a specific period of time. In other words, it is the graphical representation of price movements for a given period of time. They exhibit the opening price, closing price, high and low prices of a financial instrument. Candlestick patterns are very popular among traders as each if its bar contains much more information than the conventional line charts or bar chart.

If the opening price of a stock is above the closing price, then a filled candlestick is drawn. It the closing price is above the opening price, and then a hollow candlestick is drawn. This hollow or filled portion of the candle is known as the body or real body. The lines above and below are known as shadow, tail or wick and it represents the high and low price range within a specified period of time.  There are many patterns in the candle sticks that have gained popularity among traders due to their simplicity and accuracy.

Here are the most powerful candlestick patterns which would be helpful in doing technical analysis of a stock and derive BUY or SELL signal.

These are the easiest identifying candlestick pattern as their opening and closing price are close to each other. The candle thus looks like a plus sign with a chance that high and low wicks of the candle being of different lengths. These are neutral patterns. However, they gain significance if they appear after a period of steady buying or selling. By itself, a doji signals an end of the previous move.

As the open and close are near the same level, it signifies the end of buying in an uptrend and an end of selling in a downtrend. This does not necessarily mean that there will be a V shaped move on the either side, but brakes have been put to the previous trend. A doji occurring in a range bound movement has little significance.

e.g. HPCL has formed Doji Candlestick on 20th November, 2017. Means it has broken the previous low and is now ready for upward trend. 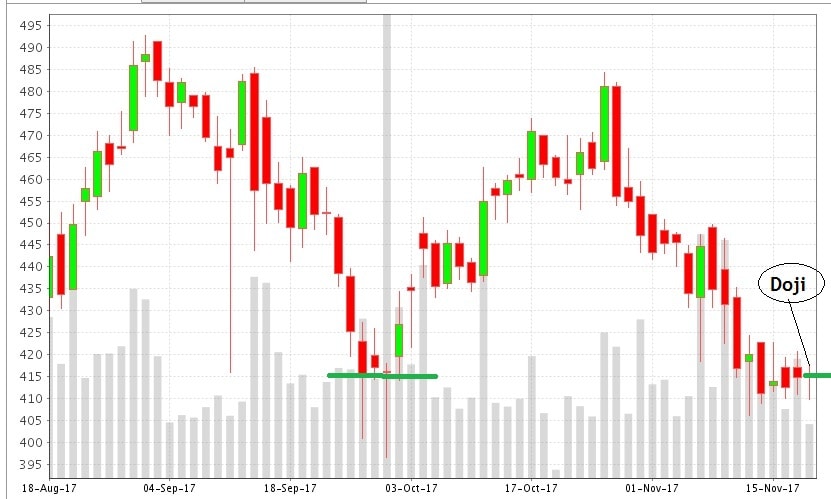 It consists of two candle pattern. It occurs when second or latest candle overshadows the previous candle completely. Symbolically it means that the buyers have overpowered the sellers or vice versa. There is two type of engulfing patterns-

It is a bullish indicator suggesting a possible up move. In this case, the second candle’s body completely engulfs the previous day’s candle. Both the wicks of the candle of the first bar is covered by the second candle. 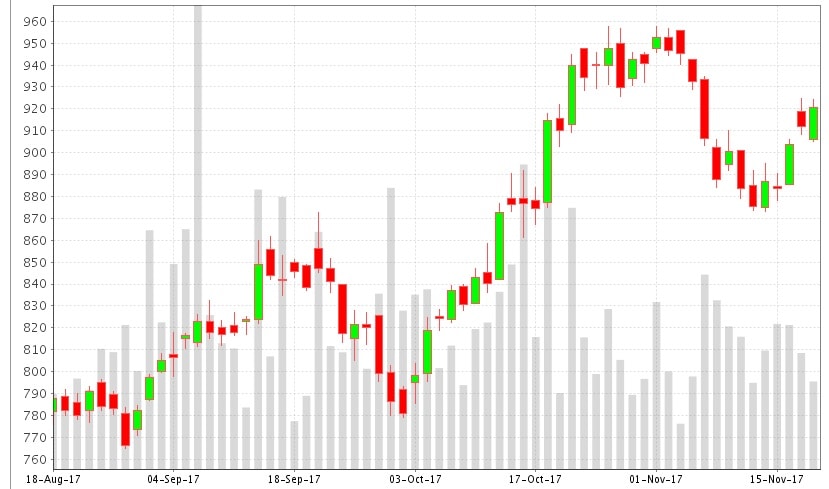 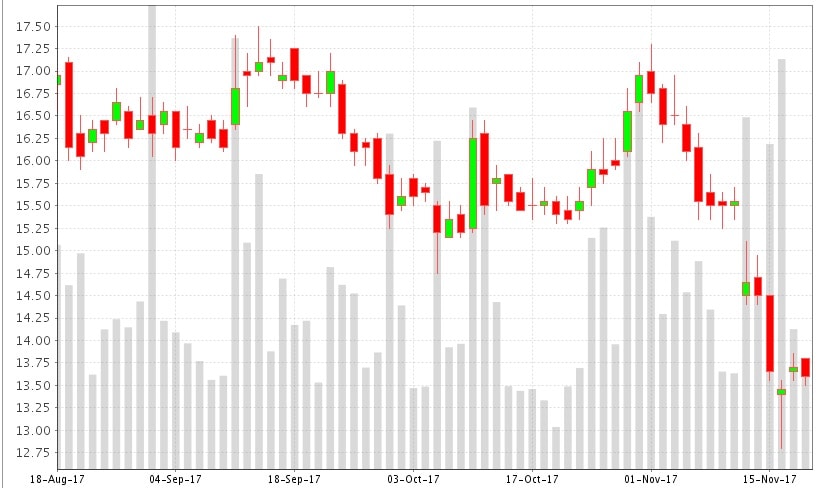 e.g. Narayana Hrudalaya stock has formed evening star candlestick pattern on 20th November, 2017. Means it is the end of the bull move. 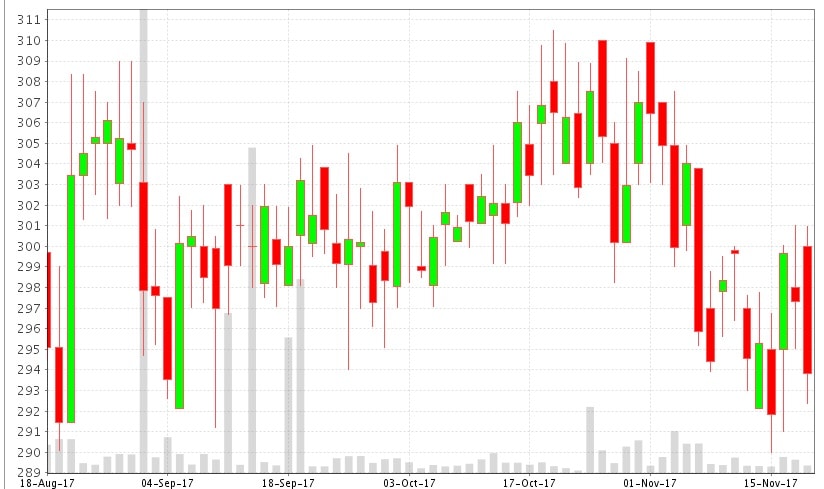 This candle is formed at the end of an end move. The rally is near its exhaustion which leads to a sell-off in the opening hours of trading. The market, however, reverses and closes near the top, but it could either not cross the previous day’s high or it barely does.  The morning sell-off suggests that the bull is losing control and may end up losing the fight going forward.

The candle has a small body at the top with the opening and closing being close to each other. By itself, it does not signal an end of the rally but forewarns of the coming danger. A crossover below the low of the Hanging Man pattern confirms the end of the rally.

E.g. Procter and Gamble (P&G) has formed Hanging Man candlestick pattern on 20th November, 2017. Means this stock has come to end of the rally and expected to fall in future. 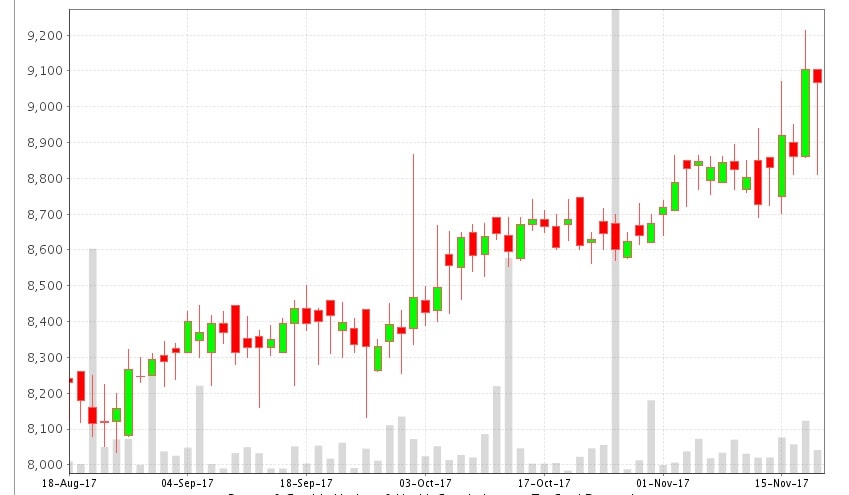 Source of the Charts: Topstockresearch.com on 20th November, 2017.

When should you consider these Candlestick Patterns?

Considering only technical analysis for buying or selling a stock would be a disaster. These candlestick patterns indicate the direction of the stock. If you are tracking a stock and checking a right time to buy or sell, these patterns would be really helpful. Considering blue chip stocks and adding a flavor of technical analysis through candlestick patterns would help you to buy a right stock at a right time.  These are several websites like moneycontrol.com/markets/technical, topstockresearch.com, stockcharts.com which provides technical analysis and various sub parameters under it to filter the stocks that are either bullish or bearish in pattern.