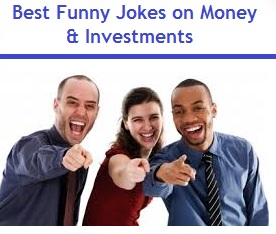 The market is weird. Every time one guy sells, another one buys, and they both think they’re smart.

An economist is an expert, who will know tomorrow, why the things he predicted yesterday didn’t happen today

Where should I invest my money? Put it on booze. Where else you get forty percent?

Who was the world’s first stock broker? Noah – He floated his stock while the world was in liquidation.

An investor to his advisor: Is really all my money gone? No, of course not. It’s just with somebody else!

Don’t marry for money; you can borrow it cheaper

Money can’t buy you true love.It does however put you in a good bargaining position.

Since he lost his entire fortune,half of his friends do not want to know him anymore.

The other half do not know it yet! What leads most people into debt? Trying to catch up with people who are already there.

What’s the best way to get in touch with your long-lost relatives? Win the Lottery.

If you think no one cares about you, try missing a couple of payments.

Money isn’t everything… But it sure keeps the kids in touch.

There are three kinds of people. Those who can count and those who cannot.

My wife’s purse was stolen the other day.It had all her credit cards in it. I was going to report it but the thief was spending less than she was!

My wife and I have a joint account. I deposit money and she withdraws it.

Daddy, how much does it cost to get married? I don’t know, son, I’m still paying for it!

Do you love me just because my daddy left me a fortune? Not at all, darling. I would love you no matter who left you the money!

When is a man worth a Euro? When he pushes a shopping trolley in the supermarket

Where can you always find money? In the dictionary.

Nurse: How’s the boy who swallowed a pound coin? Doctor: No change yet.

Why did the boy eat his cash? Because it was his dinner money!

I have spent most of my money on women and beer. The rest I just wasted…

Thz cost of living is the difference between your net income and your gross habits!

If we really did profit from our mistakes, I’d be extremely rich by now.

Money is always there, but the pockets change.

What is the difference between a gambler and a pizza? The pizza can feed a family of four.

I wish I had enough money to buy an elephant. What do you want an elephant for? I don’t, I just want the money.

Foreign Aid: The transfer of money from poor people in rich countries to rich people in poor countries.

Remember the golden rule: Those who have the gold make the rules.

A family man says: I now know why I used to love Christmas as a child.I did not have to pay for the gifts!

The taxman says: We’ve got what it takes to take what you’ve got!