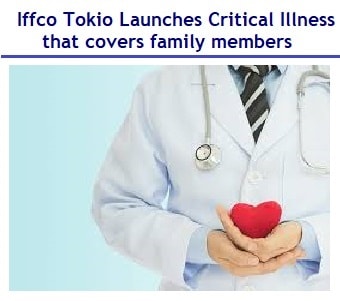 Also Read: Best Health Insurance for you and your family

What are Critical Illness Plans?

Critical illness plan insurance, also known as critical care insurance, is a type of insurance plan that compensates policyholders with a lump sum payment after getting diagnosed with a specific illness that is listed on their insurance document. Critical illness insurance policies can also be structured to make serial payments based on the policyholder’s ongoing medical treatments and condition. Again, this would depend on company to company that offers such plan.

If you are confused on how such critical illness works, you can read further.

Critical illness plan generally comes with a list of critical illnesses that are included in the policy document. Each illness will have criteria that define when you qualify for a payout of such insurance amount. There are many cases where people think they will get covered because they have been diagnosed with “cancer”, for example. But then the wording of the policy itself has criteria that must be met, and if it is not, the critical illness claim may be denied. It is important to review policy conditions of a critical illness policy carefully, as well as how the policy defines the disease or condition and if there is a waiting period.

If you want to know more info, you can check this video about Critical Illness Plan and how does this work.

This Infographic would provide the details of incidents and survival rates of Critical illnesses. 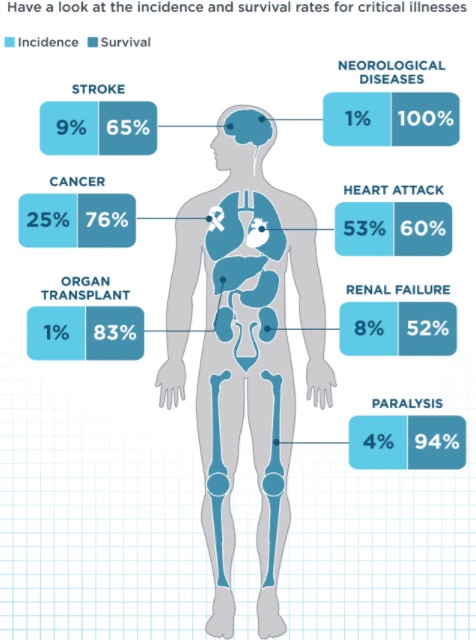 Iffco Tokio has launched this unique policy wherein single plan it covers all family members. You can add any of your family members including spouse, parents, children and parent in-laws.

Discount on premium is offered if you include family members in this plan.

If you take sum insured of Rs 1 Lakh, premium works out to be Rs 257 per annum.

This critical insurance plan covers 25 critical illnesses and covers health conditions such as blindness, deafness, loss of speech and loss of limbs and also surgery procedures.

This health plan covers 25 critical illnesses that include paralytic cerebral strokes, coronary artery diseases, cancer, renal failure, major organ transplants and accidental injuries which result in loss of limbs. In case you are diagnosed any of these critical illness one would get a lump sum amount.

One would get income tax benefit u/s 80D for the premiums paid for this plan.

What are the premiums in this critical illness plan?

1)  If an individual aged 25 years consider this plan for Rs 1 Lakh sum insured, the premium works out to be Rs 257.

Who all can be included in this critical illness plan?

One can consider this as a single plan or can add their spouse, children, parents and parent in-laws in this critical illnesses plan.

What are the various critical illnesses covered in this plan?

You may like: Best Health Insurance Plans for your parents

Should you opt for Iffco Tokio Critical Illness Plan?