Why Aditya Birla Payments Bank is Shutting down? 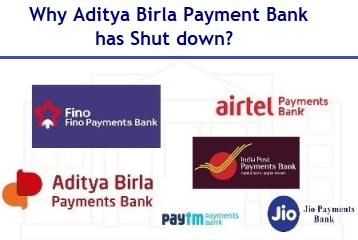 Why Aditya Birla Payments Bank is Shutting down?

What are Payments Banks in India?

A payments bank is like any other bank, but operating on a smaller scale without involving any credit risk. In simple terms, it can carry out most banking operations, but cannot advance loans or issue credit cards. It can accept demand deposits (up to Rs 1 lakh), offer remittance services, mobile payments/transfers/purchases and other banking services like ATM/debit cards, net banking and third party fund transfers. In Aug 2015, RBI has issued 15 payments banks licenses.

Aditya Birla group announced on last Saturday that it would shut down its payments bank business. Company says it is winding up due to unanticipated developments and business model is unviable.

Aditya Birla is waiting for approvals from concerned authorities for voluntary wind-up of its payment business.

It started its operations in Feb-2018 and within 18 months it is shutting down its payments bank business.

Currently it has 200 employees and the company said majority of them would be absorbed in its group business entities.

This payment bank has mobilized upto Rs 20 Crores deposits from its customers. Company said it is making arrangements to return customer deposits.

How to withdraw your Balance and FDs from Aditya Birla Idea Payments Bank now?

Company is making arrangements to return customer deposits. If you have an account in Adiyta Birla Idea Payments Bank, you can transfer the balance through online, mobile banking or by approaching the nearest banking point. Its customers can also reach out the toll free number 18002092265 or email to vcare4u@adityabirla.bank regarding this.

Why Payments Banks are shutting down?

RBI has issued 15 licenses in Aug-2015 to open payments banks in India. While Aditya Birla Idea Payments Bank has indicated it is shutting down last week, earlier there were 3 more payment banks from Tech Mahindra, Cholmandalam Investment and Finance and Dilip Sanghvi group company between IDFC Bank and Telenor Financial Services have already shutdown. Let us look at some of the key reasons:

1) Payments banks are struggling to garner fixed deposits. While total deposits of payments bank are at Rs 780 crores as of end of Dec-2018, Aditya Birla Idea Payments Bank has garnered less than Rs 20 Crores.

2) There are stringent KYC norms which are making difficult for payments banks to get customers and deposits.

Why Aditya Birla Payment Bank is Shutting down