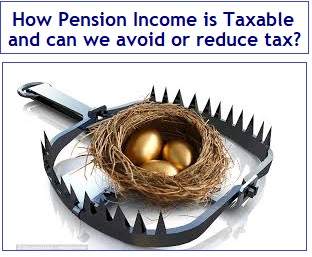 The biggest tension in the life of an employee is what would be his source of income after retirement and how would he meet his day-to-day requirements. Banks or Insurance companies have a variety of retirement plans for such retired individuals like pensions. Even Pension received by Senior Citizens are sometimes taxable. What are various types of Pensions offered in India? How commuted pension and uncommitted pension is taxable in India? How to show Pension Income in income tax return? Can we avoid or reduce income tax on pension received in India?

What is Pension Income?

During the employment period, the employee has to contribute a certain sum of money to a special fund called pension fund and from which payments are withdrawn periodically when the person is retired from work which is called as pension. A pension is a form of saving a person makes to support his old age life.

What are various types of pensions?

1) If uncommitted or regular /monthly pension received by him, It is fully taxable in India in the hands of the receiver and is included in the head of salary.

2) If commuted pension received by himself, it is exempt from tax in certain cases. For a government employee, it is fully exempted and for a non-government employee, it is partially exempt. If case of gratuity is also received with pension, 1/3rd of the amount of pension that would have been received if 100% of the pension was commuted is exempt from commuted pension and the remaining is taxed as salary.

3) And in cases where the only pension is received and gratuity is not received, ½ of the amount of pension that would have been received if 100% of the pension was commuted is exempt from tax.

4) If a commuted pension is received by family members, it is exempt from tax.

It is shown under the head of ‘income from other sources’ in the income tax return of the beneficiary.

Are there any exceptions?

1) Pension received from UNO by its employees or their family member is exempt from tax.

2) Pension received by family members of armed forces is also exempt from tax.

Where to show the pension income in income tax return?

If the taxable income of an individual is above the exemption limit, he or she has to file tax returns. Pension income is treated as income under salary only if received by the pensioner himself. Form No. ITR 1 (also known as Sahaj) can be used by most pensioners to file their income tax returns. It is a form that can be used by individuals who do not have any business income and own only one house.

If the uncommuted pension is received by other family member, it is included under the head – income from other sources. The deduction of family pension u/s 58 (iia) is applicable (discussed above).

How to avoid or reduce Tax on Pension Income in India?

Here are some ways on income tax can be reduced by Senior Citizens on the pension income received by them.

1) The Union Budget 2018 was announced recently and has introduced a standard deduction of Rs 40,000 with respect to miscellaneous medical expenses and transportation allowance. This tax reform is going to offer tremendous benefit to pensioners and salaried employees.

2) Section 80C – Individuals and family members of the pensioners can claim tax rebate u/s 80C (this was earlier provided under section 88 which was merged with 80C from 2006 onwards). Premium towards the insurance policies, PPF, infrastructure bonds, repayment of the home loan, equity investments, etc. are exempt up to a limit of Rs 150,000.

3) Interest income is exempted upto Rs 50,000 per annum. If such senior citizen receives higher amount, they need to pay tax on excess amount received above Rs 50,000.

4) Section 80DDB provides a deduction to an assessee in case of expense for medical treatment of specified ailments. The deduction allowed under this section earlier was Rs. 60,000 for Senior and Rs. 80,000 for Super-Senior Citizens. This has now been increased to Rs 100,000 for both Senior and Super Senior Citizens with effect from FY 2018-19.

If the pensioner receives pension via nationalized bank, TDS provisions are applicable as is the case of salary income. The banks allow for deductions. Likewise, banks also grant relief u/s 89 (1) for any pension arrears. It is important to note that TDS is not deducted on family pensions as the latter does not come under the income from salaries head.

How Pension Income is Taxable in India

3 thoughts on “How Pension Income is Taxable in India and can we avoid or reduce tax?”