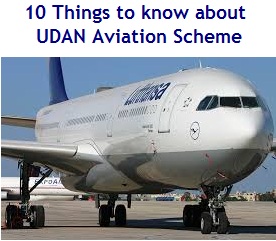 Keeping in mind the average man in India, and to boost connectivity between small cities via air, the Udan Scheme has been launched. Its acronym is ‘Ude Desh ka Aam Nagrik’ or ‘helping the average Indian fly’.

1) The scheme is planned to be launched in January and will be in operation for 10 years with provisions reviewed at least once in three years.

2) Airport Authority of India (AAI) would be the implementing agency for this scheme. This scheme is first-of its kind and ensures connectivity, affordability, growth and development.

3) For this scheme, the Government has spotted the unused or underused airports of smaller cities, which have a built infrastructure like terminal building and air traffic control towers.

4) It is also planning to reopen the disused airports and a budget of Rs 4,000 crores has been passed for the same.

5) Bikaner and Jaisalmer of Rajasthan, Bhavnagar and Jamnagar of Gujarat, Bhatinda and Pathankot of Punjab, Allahabad of Uttar Pradesh, and Lakhimpur and Jorhat of Assam are the examples of the few airports that have been included in the Udan Aviation Scheme.

6) The Airline companies have been asked to bid for the routes of towns to cities. Successful bidders will have exclusivity on that particular route for three years after the support from Government will be tailed off as the market becomes sustainable on its own.

8) Apart from concessional rates, the airport operators will not subject to any levies or charges impose the airfares. Service tax will be levied at 10% of the taxable value of tickets of all passenger seats of Regional Connectivity Scheme (RCS) flights, without any input credit, for an initial period of one year from the date of notification of the scheme.

9) If the cost of a seat were higher than what the airline companies have been asked to charge, the balance would be paid by the government. Government would be collecting from the airlines that are operating on the profitable routes. Technically, it is known as Viability Gap Funding (VGF). The government will charge either 2% cess from every passenger flying on profitable routes or Rs. 8,000 from every airplane landing at an airport of metro cities.

The government’s proposal to levy a bit extra on every departure of flights on major routes in order to fund the scheme has not been appreciated by many of the airlines as they feel that such move would push the airfares up and suggested to go for some other way of funding.

Conclusion: To start air traffic at smaller stations is indeed a very good initiative by the Central government but the way they are thinking to fund this scheme out is quite worrying. The government should think of all possible alternatives before increasing the airfares at busier routes.