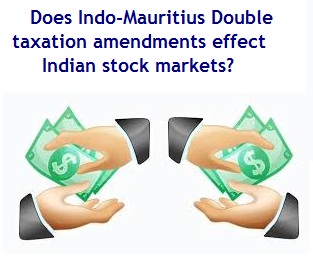 What is existing Indo-Mauritius Tax agreement?

The change is that if any capital gains arising in India, it would be taxed in India. Investors from Mauritius therefore, comes under capital gains taxation net. Govt. of India has managed it very efficiently. Below are the amendments to Indo-Mauritius Double Taxation agreement.

1) These amendments are effective from 1st April, 2017. Means, any Mauritius investor investing after 1st April, 2017, these guidelines would apply. Existing investors or investors who wish to buy shares in companies by 31st March, 2017, would not be taxed as per new amendments.

3) From Apr-2019 onwards, investors can decide their investments based on tax rates applicable at that time in India.

4) The Singapore tax treaty is linked to Mauritius tax treaty, hence it would also get impacted.

Does the Govt. of India gets higher taxes due this agreement?

This tax is payable by Mauritius investors for short term capital gains. Indian stock markets are not providing that good returns in the short term. We are seeing SENSEX in the range bound of 25,000 to 27,000 points in last 2-3 years. Hence it is unlikely that Govt. of India would get the biggest benefit out by way of higher taxes due to this amendment to Indo-Mauritius double taxation agreement. These amendments would work more to plug-in loopholes to stop black money flow to Indian stock markets.

Also Read: How to invest your money to get superior returns?

How Indian Stock markets reacted to this?